Apologies for yet another unexplained and prolonged absence. During the last few months, I tried and failed several times to muster up the will and courage to produce another video. I developed an impressive mental block towards it – as you do when an assignment seems too difficult, and time-consuming, and your last few assignments didn’t return the grades you were hoping for … so I did what I do best and avoided it.

After a certain point I had to wonder WHY a silly cover was stressing me out so much. They used to be for me. They used to be for fun. But I had begun to channel (haha geddit) too much of my expectations and self-worth into these videos. I was obsessed with trying to get a “perfect” take and would sometimes re-do a song 20 or 30 times over the smallest issue. The stupidest thing was, I could always sing the song “perfectly” when the camera wasn’t rolling. I just had a case of increasingly debilitating stage fright. In my room. On my own.

But on the good days, I could still pick up a guitar and get lost for hours singing whatever I wanted. So I devised this plan to try and trick myself – if I just kept the camera and mic recording, plopped myself down for a few hours and sang whatever I wanted, maybe I would begin to enjoy myself.

It … half-worked. I was still acutely aware that I was o n c a m e r a the whole time. I had to stop and start to anxiously re-adjust angles, lighting, re-listen to takes. But I did end up with this strange middle child of a video which, for all its flaws and awkwardness, I still find endearing. It feels a little bit authentic. And, after all, in the language of mental health (and Dr Seuss?) something small is better than nothing at all.

Thanks for coming to my TED Talk. Hope you all are well. Missed you.

Which was your fav? Can you guess which mine is :D 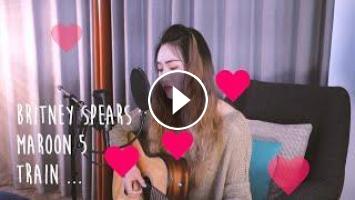 Song list: Toxic – Britney Spears This Love – Maroon 5 Umbrella – Rihanna Hey, Soul Sister – Train The One That Got Away – Katy Perry Back to basics. ...