admin
Welcome to Episode 2 of the Yu-Gi-Oh! Deck Builder Series for the Dark Magician archetype in the Yu-Gi-Oh! Trading Card Game! In each episode, we will modify our deck profile based on three previous match duels (best of 3) and engage in three new match duels to put it to the test! We will incorporate your feedback with ours to try and build the best meta competitive Dark Magician deck possible for the Yu-Gi-Oh! TCG format.

In episode two, we changed our deck profile based on your feedback and ours to try and better turbo out Dark Magician The Dragon Knight. We dueled in a best of three match duel against a competitive Prank-Kids deck using the new deck, and you'll have to watch to find out the rest!

Remember, comment below with your feedback on how you would like to see the deck changed, and why! Make sure to base your feedback on the goals we have set for this deck and the duels in which we won or lost, and finally based on what cards worked well, or did not work well and need to be changed, removed, or side-decked.

We are using the EDOPro duel simulator in this video and are playing by the July 2021 TCG Master Rules abiding by tournament standards, rulings, and banlist.

Hello!
Destined Rivals is made by David & Rebecca Anderson. We love to open Yu-Gi-Oh! products and we love to duel! Whether its a pack opening, tin, booster box, booster pack, blister pack, or special edition, we really enjoy opening and pulling exciting cards. You will also find us creating a deck profile from time to time, or dueling with structure decks, starter decks, or even competitive and meta decks we have built! Our goal is to share our enjoyment of Konami's Yu-Gi-Oh! trading card game with you, and hopefully (successfully) entertain you in the process. 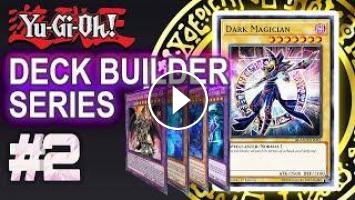 Welcome to Episode 2 of the Yu-Gi-Oh! Deck Builder Series for the Dark Magician archetype in the Yu-Gi-Oh! Trading Card Game! In each episode, we will...